In My Career Journey, Software Engineering

Welcome to another wonderful time again in the life of a software engineer.

So last month, somebody drew my attention on Twitter to a tweet from a former colleague I worked with, saying how he missed me and missed the way I work. 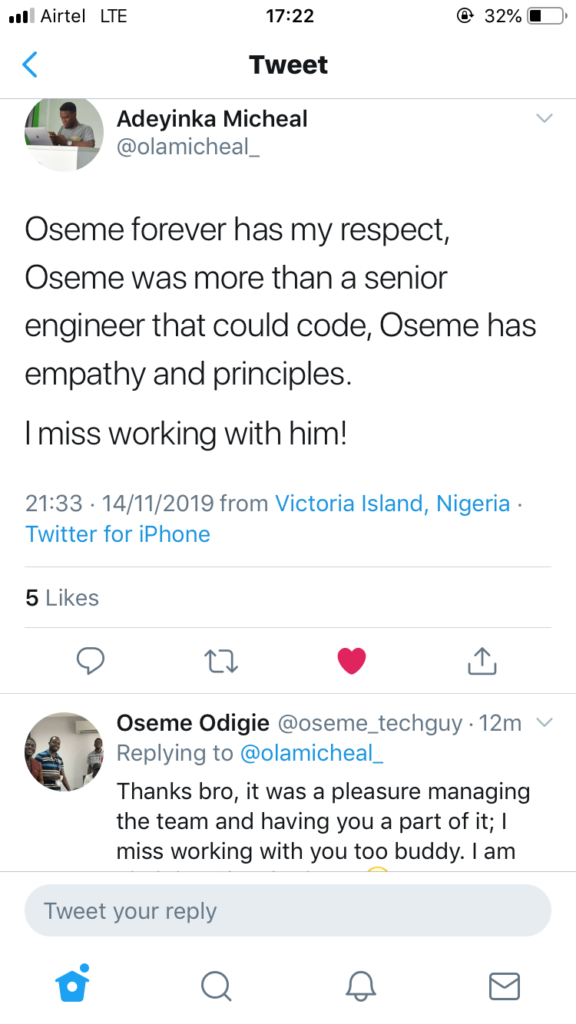 It felt really good because when you put in a lot of effort and get this kind of feedback, it helps to provide some sort of validation that the effort is actually worthwhile 🙂 . I mean I worked with him over a year ago (he was on my team and reported to me) and for him to still refer to that time and say he really missed the way I worked felt really good.

It means a lot to me and motivates me to keep going forward and to keep being a great leader / manager. I know that I am still improving (and have improved quite a lot since last year) as an engineer and an engineering manager but it felt really good for him to say that about me 🙂 . I mean he said that I have empathy, he also said that I am very principled; these are some of the things I live with/for. I make sure that I have empathy when dealing with individuals and I also make sure that I have and live by certain principles. I try to be as technically grounded as possible and also know how to motivate people at different levels of their expertise/skill levels.

I actually remember a video my former CTO shared with us – me and my colleague, Ifiok – the video was discussing the different stages of a software engineer. It was talking about the fact that the development of engineers are in 3 stages:

The second stage/level of a software engineer is the mid-level engineer, someone who has implemented a lot of solutions that they now really understand how to solve problems. These set of engineers are the Problem Solvers. You can give them a problem and they can break it down into different solutions that they could implement themselves to solve the problem or they pass the proposed solutions down to the Solution Implementers to implement.

In part 2, I will give a detailed example of how these stages/levels play out in a typical real-world scenario.

As usual I will leave you with a word from the elders:

“The only way of finding the limits of the possible is by going beyond them into the impossible.”
—Arthur C. Clarke

So until next time, have a wonderful and productive week.

I will be back…. and I am back